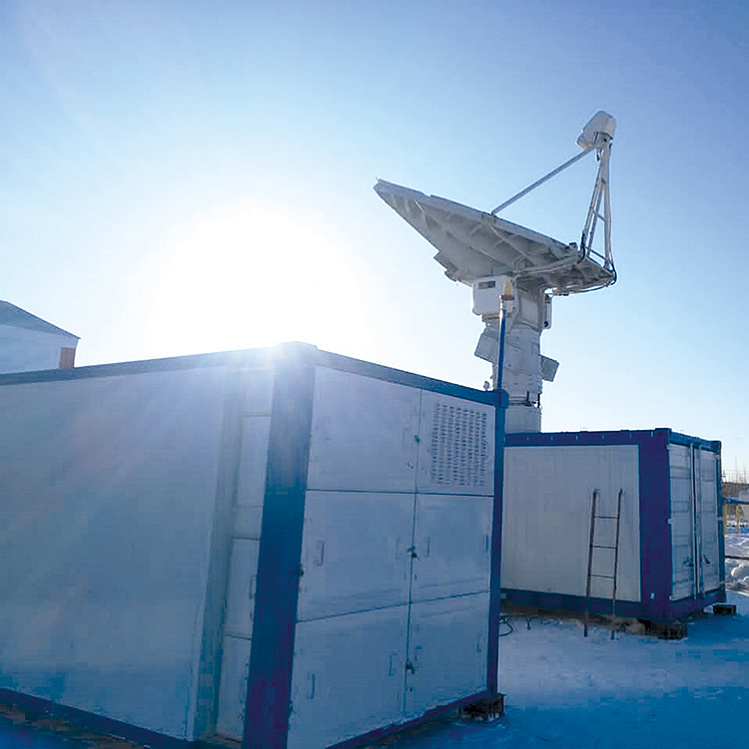 Roman Provotorov, Head of the Department for Space Monitoring of Emergencies at the “National Crises Management Center” Main Office of the Ministry of Emergencies (MES) of Russia, reported on the successful interagency cooperation during operation of the Mobile Transmit/Receive Complex (MTRC).

The MTRC has been operating for over a year in the Republic of Sakha (Yakutia). I happened to participate in many of the stages of implementation of this effective and successful cooperation between two major entities. Specialists from the departments of the MES of Russia first saw this Complex at the MAKS exhibition, organized by the Roscosmos state corporation. It took us some time to study its capabilities and technical characteristics. By that time, the MES of Russia and Roscosmos have already cooperated together under the Agreement, governing the activities on deployment of the RIPI designed ERS data receiving complexes, applied for emergency prevention.

In 2020, all the legal formalities for the MTRC transfer to the Republic of Sakha (Yakutia) had been settled and the transportation operation of unprecedented scale took place under challenging circumstances of increasing COVID-19 pandemic.

The hard epidemiological situation throughout the Yakutia threatened the very feasibility to successfully deliver the Complex, but we managed to achieve this goal. The Complex was further deployed, put into operation and permanent duties of joint crews were organized. April 10, 2020, the MTRC proceeded to acquire and process the ERS data, received from Russian and foreign orbital constellations for surveillance of the regions of the Far Eastern and Siberian Federal Districts. The MTRC became an important additional tool for the MES territorial departments to supplement its four own and two joint with Roscosmos space monitoring centers.

The first priority of the Complex was identification and assessment of forest fires and flooding; monitoring the environment with a view to preventing natural disasters.

In its first months of operation, the questions related to interaction between all those involved in this process were settled: from placement of requests for conducting a survey up to coordinating all the procedures related to data downlink transmission to the MTRC and transfer of ready imagery to the National Center afterwards.

At present, the Complex is being operated by the joint crews composed of specialists from our Institute and the Emergency Situations Ministry. The MES personnel were permitted to manage the Complex, after having passed an appropriate training course. Currently, this is the major innovation, the rest of it remained unaltered: monitoring takes place 24 hours a day; daily reports are issued on problematic area situations and promptly brought to the RIPI staff and sent to Roscosmos and to the Research Center for Earth Operative monitoring and. The following morning this operational information is received at the “National Crises Management Center” Main Office and to the MES of Russia executives. So, at 6:30 a.m., for the conference call, the most up-to-date information on the current situation related to environmental hazards such as flash floods, forest fires, etc. is submitted to the Minister of EMERCOM of Russia and his deputies.  It is thanks to the operation of the MTRC that we began to acquire the data, to predict, plan and respond to emergency situations in more improved, expeditious and precise manner. That is why the leadership of EMERCOM of Russia and the government of the republic of Sakha appreciated the work of the MTRC; the enhanced efficiency in predicting, preventing and eliminating emergency situations resulting from different causes.

The Russian Far East is one most challenging region in terms of probability of emergency situation occurrence. The territory of the Republic of Sakha (Yakutia) covers 18% of the entire surface area of the Russian Federation and is characterized by low population density, harsh climate and the abundance of industrial organizations, which could all become a source of natural and man-made emergencies. So, the presence of the MTRC in Yakutia is fully justified; operation is feasible, particularly in the light of the spring risks, floods and forest fires.

Furthermore, the Complex additionally “covers” the territory of the Arctic region with the satellite monitoring. At present, the monitoring centers are functioning in Murmansk and Dudinka, and until the center in Anadyr is put into service, the MTPC will work in the Arctic and eastern parts of the Russian Federation. Satellite monitoring is becoming the primary instrument for operational control of emergencies, taking into account the intensive development of the Arctic transport system and the transformation of the Northern Sea Route into a year-round international transport artery. For example, last summer, using the MTRC we obtained high-resolution satellite images from the Russian ERS satellite constellation from the site of the oil spill in Norilsk, thereby helping to speed up the elimination of consequences of this spillage. Now our Complex is keeping an eye on the cyclone, formed over the Amur river and flooding of Priamurye territories. In that regard, we look forward to continuing and further developing the cooperation in satellite monitoring of emergencies between Roscosmos State Corporation and the Ministry of Emergencies of Russia.